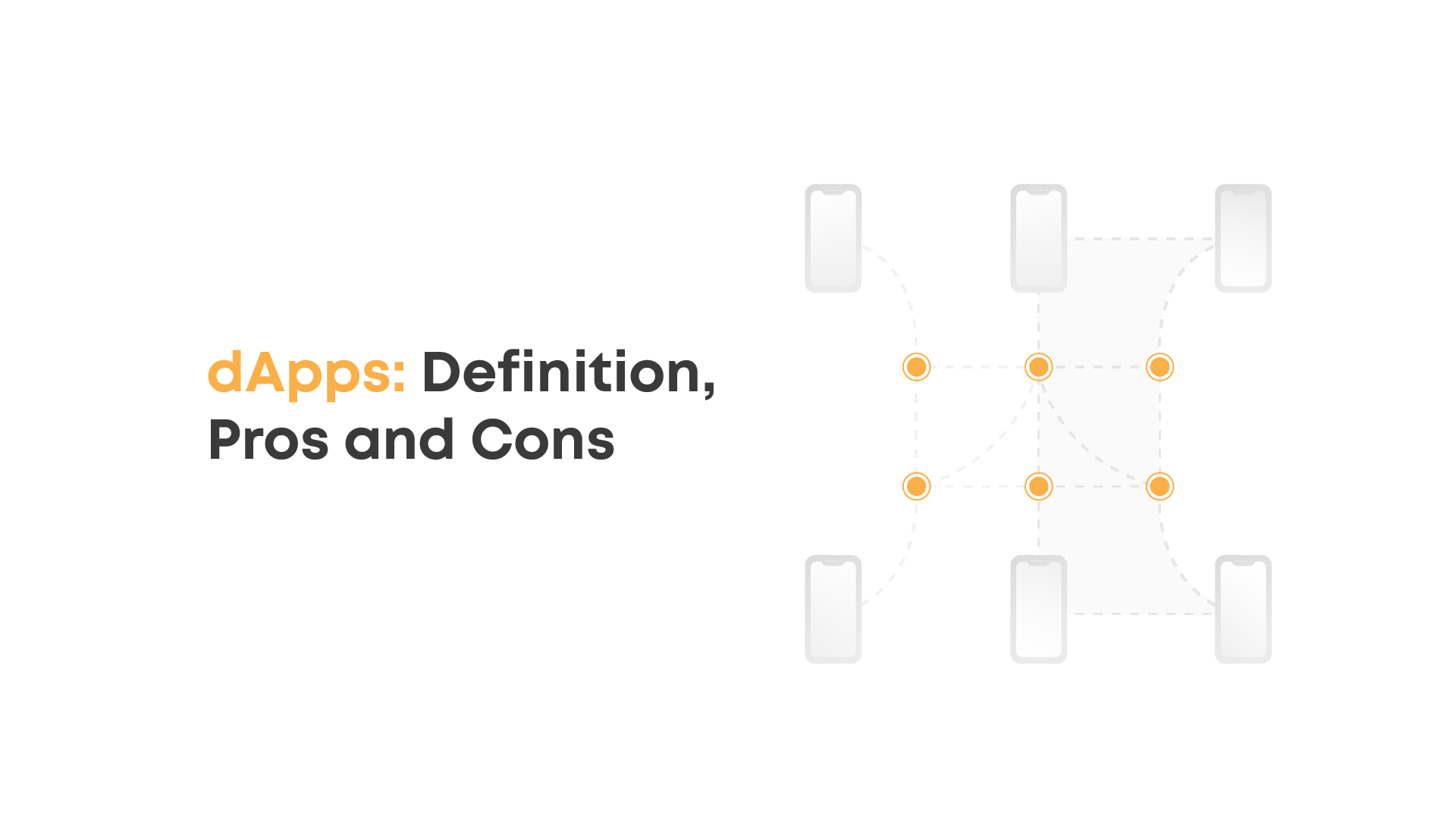 Dapps have entered the app development realm fairly recently. Even though there are more than 3800 dapps by the end of 2021, 1970 of which are live, this technology is yet to be harnessed.

In this article, we will briefly overview the newly emerging technology and share our vision of how it will root in the development world and enable smarter digital transformation.

What Is a Decentralized Application?

Let’s start with an example to help you grasp the dapps meaning easier. You all know that a Facebook app runs on a computer system owned by Meta Platforms. In this way, the company gets full responsibility and authority over the app and its data. This makes software vulnerable to security threats and downtime in case of the hosting server failure.

Dapp, a decentralized application, was built with the aim to put an end to these issues. It is a piece of open-source software that runs transactions on a decentralized computing system without a single authority. It means that no single entity controls the app as data is stored on distributed nodes, making it more resistant to cyberattacks and downtime.

From the user’s side, dapps are pretty similar to traditional apps and offer the same functionality. The front end is coded in any language that can interact with the back end. But when it comes to the back-end facet, that’s where the main dissimilarities become more vibrant. They have a unique code that works on a specific platform. Thus, dapps might require a special browser like Brave or Opera First to connect to decentralized applications on a blockchain.

How Do Dapps Work?

So, dapps run their backend code on distributed computing systems, such as blockchain. Due to this, they inherited a range of characteristics innate to blockchain technology:

Most dapps run on the Ethereum blockchain platform that allows developers to build and maintain custom applications. Smart contracts are the core of dapps, and they shape the software logic.

Smart contracts work pretty much the same as the Autopilot feature in Tesla. You code a set of rules which get self-executed once certain conditions are followed. This significantly increases the operational efficiency and decreases the execution time as there is no need to get approval from third parties and manually process the requests. The algorithm will do its job.

Another significant feature of dapps is that once you deploy the app on the network, you can’t change it. It means that any network member (or hackers) can’t change the code until approval from a certain percentage of nodes. Special consensus algorithms (frequently based on the token-driven voting system) allow all token owners to be proactive in the dapp development.

As dapps are decentralized, they have no single point of failure. Dapps are run on hundreds or even thousands of nodes. The disruption of one node won’t cause the dapp to be offline, so the decentralized software will always be up and running to satisfy the users’ needs.

Do you remember the failure of Facebook, Instagram, and Whatsapp in October 2021 that was the result of mistakes made during network maintenance? That would have never happened if those apps were run on the blockchain.

One of the most significant perks of dapps is the ability to ensure user privacy. To use a decentralized app, you don’t have to hand over any personal information like name, contacts, location, financial data, and more. These apps use smart contracts to carry direct transactions between two anonymous parties without requiring you to share your sensitive data with any third-party entities.

Dapps make it possible to deploy DeFi, decentralized finance, a system that ensures anonymous peer-to-peer financial transactions without the need to refer to middlemen or other third parties. This ecosystem gains trust and allows carrying transactions faster at a reduced cost. This is especially beneficial for banking dapps or those that rely on transactions.

Smart contracts have proved to act in predictable ways, so they are used to automate cumbersome processes like agreement verification and more. Two independent parties can carry out any transactions without referring to a centralized authority with programmed smart contracts. Once pre-specified requirements are fulfilled, smart contracts trigger a coded action without direct human involvement.

Dapps run on a distributed and immutable network that eliminates the risks of hacker attacks and data breaches.

Dapp data is distributed among numerous nodes, and new records are linked to the previous entry, making a chain of blocks that can’t be altered once they enter the network. Thus, hackers who would like to tamper data and hack the system face a wall of obstacles: they’ve got to modify data on numerous nodes, which, by the way, can’t be edited.

Dapps are just entering the market, and the skill gap is a major pain for those companies who would like to switch to blockchain-based apps. Only a few people on the talent marketplace have the right skills and expertise to develop and deploy dapps, so their demand is huge.

Security is one of the strongest dapps sides, but it can promptly become the weakest point at the same time. As the developer can’t alter or upgrade the code once it becomes live and becomes publicly available to everyone, some code flaws and loopholes can be detected by malicious actors and used to access the system.

Even though dapps might have the same functionality as traditional software, it can be much harder for dapp users to access them. Because of the code peculiarities, the user might require to use a special toolkit, including a browser, to make use of the blockchain-based application.

It’s challenging to maintain dapps as it’s hard to change the code when it is published to the blockchain. Thus, if the developer wants to update the app or the data stored by dapp once deployed, it can be pretty problematic to carry that out.

Over the past few years, we have seen how dapps have been introduced to a wide range of fields, including gaming, DeFi, and more. So, let’s see what are dapps used for.

For instance, Uniswap is a crypto exchange platform running on the Ethereum blockchain. Another decentralized exchange, Pancake Swap, is a part of the Binance Smart Chain ecosystem allowing to swap BEP tokens.

Apart from swapping crypto, dapps are used for trading NFTs. OpenSea is a decentralized marketplace for selling and buying digital goods.

Many play-to-earn games are also dapps – like Splinterlands, Tap Fantasy, IguVerse, and more. Such dapps as Alien Worlds, Upland, Sandbox, and others let everyone be a part of a metaverse, a digital world where players can create any gaming experience, is possible thanks to the blockchain technology.

Are Dapps the Future of App Development?

We live in a fascinating era of Web 2.0 applications that give users a flawless experience. No doubt, Web 2.0 apps are great, but there are plenty of security, privacy, and control issues that are yet to be solved.

Dapps are here to tackle most Web 2.0 software problems. They have an enormous potential to initiate a new era – the era of Web 3.0. As you already know, these apps are hosted in a decentralized distributed network maintained by anonymous nodes on the Internet to offer a constellation of advantages both for users and app owners.

But will Web 3.0 application adoption become a trend for the next five years in software development? That’s a big question.

At ORIL, we believe that dapps would gradually pave their way to the development realm and take their well-deserved place. Based on our experience and observation, our experts predict that 2023 will become the year when dapps will see a boom in this technology recognition. Within the next five years, major players in various fields will be seriously looking toward deploying dapps and transforming the tech environment within the organization.

What does it mean for developers and Internet users? ORIL team is convinced that regardless of the volatility and undiscovered nature of dapps, this technology will cause a huge paradigm shift and become a big thing in around ten years.

Features You Might Miss While Creating a Real Estate Listing Platform

Today your website has to be more than just an online brochure to compete for your piece of digital space on the Internet. It needs to consider the user experience. In other words, it should be as easy-to-use, informative, and value-added as possible. Your real estate listing platform is part of your marketing engine. As […]

How to Create a Real Estate Listing Platform

Home prices soared, buyer demand raised, and mortgage interest rates hit record lows. One of the reasons for all of this beyond the COVID-19 pandemic is technology acceleration. This factor doesn’t get the headlines but also makes a noticeable difference in the US housing market. Digital closings, remote mortgage approvals, and real estate listing platforms […]

What Monetization Strategy Should I Choose For My App?

Before getting any application off the ground, you should select the perfect project monetization strategy right from the get-go. That way, product revenue will be seamlessly integrated into the user experience. This guide is everything you need to develop and implement a monetization strategy that pleases your customers while ensuring your business is profitable. You’ll […]